My initial work with scientists John Calambokidis, Kristin Rasmussen and Tim Gerrodette provided an important baseline that has since contributed to the protection of these animals and their habitat in Costa Rica, but there is still at lot to be done research and conservation wise. About 47% of these cetacean species are classified by the IUCN Red List (2015.2) as data deficient; meaning their risk of extinction cannot be determine due to lack of information. This of course generates uncertainty about whether these species are safe or actually in danger, a difficult challenge to address, as many funding agencies do not provide grants to fulfill these kinds of gaps in knowledge. This is a concern because the ongoing biodiversity crisis is significantly affecting all cetacean populations independently of their IUCN status.

Cetaceans have a very low population growth rate making them susceptible to any kind of exploitation that affects their behavior and immediate population size including pollution (chemical, acoustic), intense harvesting, climate change, and high incidental mortality in fishing nets.

The role of Marine Protected Areas

In light of such threats, increasing establishment of MPAs in recent years has sparked hope about protecting cetaceans. However, in collaboration with Carlos Zambrana (EcoHealth Alliance) and Ingi Agnarsson (University of Vermont) we found that most MPAs fail to protect important areas of aquatic mammal diversity, due to small size and their placement.

How do we protect large extensions of water for animals such as cetaceans that have such broad distribution ranges? Where do we focus conservation efforts? How do we prioritize? A good starting point is by identifying ecologically important areas used by these animals such as the PMPOT and the Costa Rican Dome. This recognition might also provide the incentives to fill up the gap on the conservation status of many data deficient species and to protect threaten species such as the humpback whale and blue whale, which migrate every year to breed and give birth to these areas.

Filling in the blanks

Although our knowledge about coastal populations of cetaceans in the region is increasing, the progress is very slow. There is an urgent need for resources, collaboration, and logistics to establish research projects that can generate information about the levels of genetic connectivity between populations in the region, reliable estimations of species abundance, and information about the long-term effects of overfishing, noise pollution, intense whale watching, and climate change on these animals.

When asked why I decided to study cetaceans instead of spiders or bats, I always say “why not?” Many people and even some biologists think researchers in my area study these animals because of their charisma and I swear they picture me swimming and playing with dolphins.

This cannot be farther from the truth, and like researcher Asha de Vos would say “this is actually a disservice”. Studying cetaceans is challenging but is also relevant and urgent. Cetaceans are a fundamental part of our marine ecosystems large whales are ecosystems engineers that with their huge fecal plums and carcasses provide nutrients to our oceans and habitat to many marine invertebrates. Also, many cetaceans are at the top of the food chain and thus, are reliable indicators of the health of our oceans because by bioaccumulation they can store high concentrations of contaminants, and finally they provide a number services to our societies.

I am very lucky that I got offered that job back in 1998, since that first visit to the Murcielago’s Island I have had incredible opportunities researching blue whales in California, sperm whales in the Gulf of Mexico, killer whales in Iceland, humpback whales in Costa Rica and Panama, and many other species. But the most rewarding opportunity of all is to be able to contribute filling the gap in knowledge, because this knowledge can help the public, scientists and managers to make informed and responsible decisions that can reduce our impact in the live of these magnificent animals. 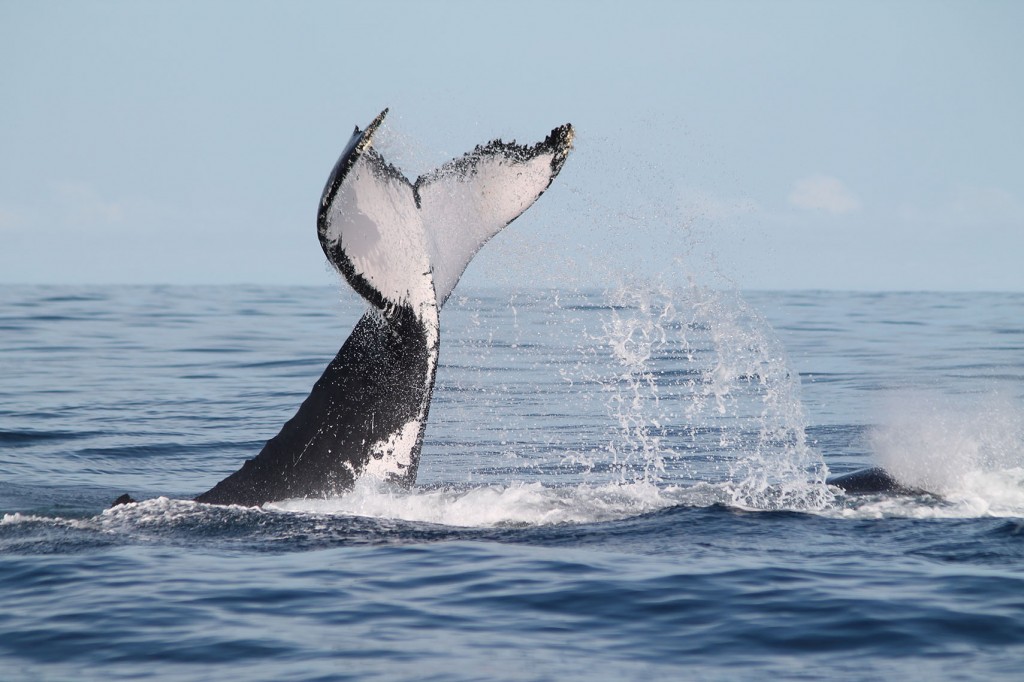 Off she goes! Photo by LJMay-Collado/Panacetacea