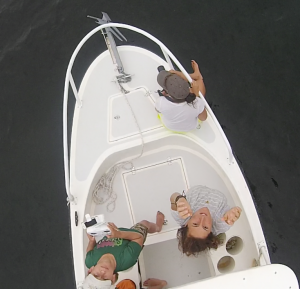 Researching with the help of drones in Bocas del Toro, Panama. Photo by LJMay-Collado

I have been working with marine mammals since 1998. My interest on this group started the year before, when working as field assistance for a Californian field biology course. As part of the program, we took students to Murcielago’s Islands, located at the tip of the Peninsula of Santa Elena in Guanacaste. This was my first time visiting the island, and I think it was my first time in a boat! To my surprise spotted dolphins followed us for most part of the trip, and throughout my visit I saw them every day. I was surprised to see them so close to the coast and immediately wondered about the potential consequences of their home range overlap with human activities.

The experience definitely sparked my interest and after doing some research, I learned that we knew practically nothing about these animals in Costa Rican waters. The only marine mammal list at the time for Costa Rica was in Daniel Janzen’s book “Costa Rican Natural History”. The list consisted of 28 species with only eight species confirmed and only one of them, the bottlenose dolphin presumed to have a resident population in the Caribbean.

I thought “Costa Rican territory is more water than land, so this can’t be right?” There was a huge gap in knowledge and I had the itch to contribute to filling up this gap. That is how my career on marine mammal started. I studied the spotted dolphins around Murcielago’s Island and Culebra Bay in the Gulf of Papagayo, by asking basic but important biological questions: are these dolphins’ residents? If so how many dolphins are there? How do they use their habitat? With funding from MacArthur Foundation/TNC and the Society for Marine Mammalogy I found out that not only were spotted dolphins residents to the area but that their abundance varied with key environmental factors associated with upwelling season, and these factors influenced no only their presence but also how they used their habitat. I also found out that you need a wetsuit, a snorkeling mask and a bucket, when working the Murcielago Islands! The choppy waters will certainly keep you busy the entire trip back to the mainland.

This first study brought my attention to the importance of understanding the distribution patterns of marine mammals at different geographical scales for conservation and management planning. Thus in 2000, I teamed up with scientists John Calambokidis (Cascadia Research Institute) and Kristin Rasmussen (Panacetacea), who back then had started to explore the possibility of northern and southern hemisphere humpback whales breeding in the Pacific coast of Costa Rica and Tim Gerrodette (SWFSC/NOAA) who had 20 years of marine mammal survey data for the Pacific ZEE of Central America.

Together we have updated Janzen’s marine mammal list for the Pacific of Costa Rica. We have also confirmed the presence of at least 19 cetacean species, using field data. This corresponds to about 76% of all cetacean species expected to be in the Eastern Tropical Pacific, and includes species such as the blue whale the largest living animal in the world and the evolutionary relicts the sperm whale and the dwarf sperm whale.