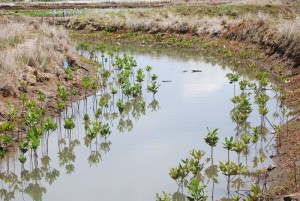 Indonesia has had to learn the importance of mangroves the hard way. Today there are several mangrove recovery programs in place. Photo by Conservation International

It all started during a massive drought in Indonesia. Peatlands (a type of wetland) began to burn. The huge amount of organic material in the soil also burned and spread disaster, fire could not be controlled for months. Amid the emergency new knowledge gained prominence: the relationship between these ecosystems and climate change.

In that scenario Miguel Cifuentes started to learn about the connection between the loss of mangroves and organic substrates, and the release of their stored carbon dioxide.

Mangrove forests store in their trees and soil huge amounts of carbon dioxide and greenhouse gases. When they are destroyed, these gases are released into the atmosphere, contributing to climate change. To preserve them, however, helps to mitigate global warming.

Miguel began to ask around and realized that no one had done that kind of research in Central America. And if we acknowledge that these ecosystems are only found in tropical and subtropical zones, our region is particularly important. He decided to promote this research and confront what he described as a mysterious green wall: “You see mangrove forests but once you disembark they are something else. What’s behind the green wall is a mystery. ”

The National Wetland Térraba-Sierpe in Costa Rica was the starting point. Miguel, who until now had only worked in land forests, faced the heat, mud, mosquitoes, crocodiles and the knowledge gap. He found his passion.

At that time the methodology used to calculate the amount of carbon stored in the forest was just being developed. Today it is an established method and it is accepted internationally. Still, Miguel concedes that there is much we do not know, but this happens to one of his favorite aspects of working with mangroves:

Knowledge is being collected, but meanwhile the mangrove cover has been reduced by 36% in the last two decades worldwide. And the planet continues to warm up. Not to mention everything else we lose when we deforest mangroves: fisheries, marine protection, water quality, sources of income. What you we have to do to preserve them?

Miguel says that the appropriation of this knowledge is central. Generate interest, disseminate knowledge so that decision makers, the surrounding communities and populations in general gain awareness of the importance of these amazing and underestimated ecosystems. People that are fully committed, as he himself says: knocking on doors, to influence and educate all levels so that information is known and action is generated.

Another aspect that is necessary is to include the results of investigations into each country’s accounting of emissions of greenhouse gases. By not taking into account how many emissions we have generated by destroying these ecosystems, we are fooling ourselves with the results and we set incorrect goals for mitigation:

The economic factor is what finally seems to get attention and to motivate action. And even in this sense the value of these wetlands is shocking. Promoting conservation and the sustainable use  of mangroves can lead to a real local, national, regional and even global economic benefit.

While the value of the services of these ecosystems has been quantified in monetary terms and is very high, this information has not been incorporated in the green accounts of the countries. That would give the impression that it is more lucrative to promote the construction of marinas than to promote mangrove parks, for example.

Changing the model, and looking at the evidence: the conservation of marine and coastal ecosystems, especially mangroves, is necessary, urgent and benefits us all.