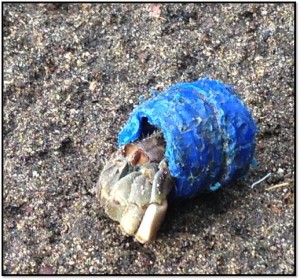 Since I was little I always wanted to visit Costa Rica. I was told of the wonders of its nature, like its lovely beaches, its imposing jungle and majestic volcanoes. Those were the reasons that led my interest in this land. As the years passed, and my career in Biology progressed, I gained knowledge of the environmental conservation efforts of the country on mangroves, turtles carbon neutrality. That was the decisive factor for my decision to visit your beautiful country, a country that has everything and protects it, which makes it a model for the world.

Dreams of the coast drove me to study biology in college, and to endure three difficult semesters of Spanish. I then had the opportunity to travel a lot, working in several Latin American countries like Honduras, Peru, Ecuador, on community projects and various biological researches. I spent a lot of time in beaches, jungles and mountains, but never in Costa Rica.

An internship with Conservation International gave me the opportunity to visit the country that interested me since childhood. There I combined science with adventure, sampling plastic waste in the most protected and used beaches of the country in order to establish a baseline of the contribution of local people to the problem of marine plastics. My dream was coming true.

Well, the beaches of protected areas in the Pacific were as spectacular as I had imagined. I drove through forested dirt roads to visit Playa Naranjo, Zapotal, Camaronal, Cuevas, Manuel Antonio and Uvita and it was amazing. For a moment everything was aligned with the image I had as a child: a paradise on earth.

But I also visited urban beaches like Coco, Samara, Puntarenas, Tarcoles, Jaco and Cocal. Ticos would not be surprised to hear that there was contamination. Syringes, tires, shoes, water bottles, bottles of Cacique mixed in the sand. I crossed the beautiful Bay of Nicoya, with green islands around, and ran into the unpleasant surprise of a landscape filled with floating plastic on the water. And I did not understand. How could this be the Costa Rica they had told me about?

Jacquelyn found plastic waste in every beach she visited.

Perhaps I had a preconceived idea of ​​Costa Rica as a country with minimal pollution problems. Actually, I should have suspected you had some since CI hired me to measure marine plastics! But it made me realize that every country has this reality. The development is reaching everyone, what can you do?

Well, considering in a more objective way what I experienced in my internship, I think that the ticos are already underway to improve their plastic waste problems. After seeing the beaches, I had the opportunity to talk to employees of municipalities, heads of NGOs, and people from various communities; most acknowledged the problem of pollution and most importantly they were already taking actions to control it. For example, the beaches that have already been protected, which motivate us to follow through.

It was very gratifying to see the efforts of the Blue Flag program and the Certification for Sustainable Tourism. They are state incentives for communities and businesses to take better care of the environment. Support groups pursuing these certifications have worked a lot with the government to separate waste and clean beaches. And these were just a few of the country’s efforts we should applaud and support.

The sad moment to say goodbye to Costa Rica came. Costa Rica, like any other place, is under development pressure. But I met many good people with the mentality, innovation and energy to keep fighting.

Thank you for the opportunity. I had a good time and I would come back anytime.