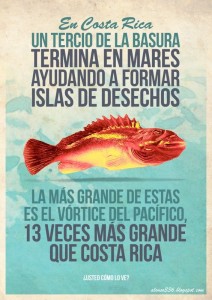 Willing to try, in 2012 I wrote this letter to the Managers of Coca Cola and the beer factory (Florida Bebidas) proposing a decrease of the plastic their companies introduce to the environment in their presentations of bottled water. The excessive amount of plastic is a matter of concern for many and from the day I published it, dozens of people signed it and the shared. It was thus that one month after its publication I received an email from the Coca Cola inviting me to their office to discuss the issue.

With the support of hundreds of people who did not know me, I met with the CEOs of two of the most powerful companies in the country. At that time, I thought the feeling of gratitude and commitment could not be greater. Seizing the opportunity, I did my best to come up with a good proposal and presented it.

Eight months after our first meeting, Florida Bebidas, honoring its word responded with action: its new advertising campaign did not promote their plastic bottle as a green bottle, and since then have an option of  returnable glass bottles.

I was aware that with this new presentation I was not changing the world or solving the problem of disposable plastic, but I received the news with pride and hope. It was a step in the right direction. The Director of Corporate Relations of that company  wrote to me saying that the campaign “was instrumental in accelerating the project.” Together we started something, and we did well.

That small step was certainly a motivation to keep going. For though there are companies that are already making an effort to contribute to the environment, many do not. Consumers know little about plastic, so we often end deciding our purchases based on advertising (not necessarily reliable) or price (which has nothing to do with environmental impact).

The truth about plastic

So much ignorance on the subject motivated me to take several months to investigate ii in depth. I visited collection centers, industrial plants, landfills and dumps, and met with divers, academics, NGOs, and any person with whom I could talk about it. Finally, in early 2015 ‘The truth about plastic “was born, a campaign to disseminate information on the consequences of the indiscriminate use of disposable plastic products.

With the campaign designed, I gave myself the task of finding financing to carry it out. I got funding to promote social media and a PR agency helped me to coordinate meetings with different media. Then I synthesized the information gathered in scripts and short comments for Facebook, I shot videos in my mother’s house with my cell phone, and I learned how to use iMovie for editing. Then, as it had happened many years before with the first campaign, thousands of strangers who also valued the subject, gave life to the campaign.

Not one step backwards

It’s been more than five years from the first note I posted about the mismanagement of solid waste, and hopefully, these days the campaign page on Facebook will reach 5000 followers. When I think about it, I can not help but remembering the voice of a friend who, quite sure of his words, told me not to publish about these things because I would not get the necessary support to achieve something significant.

More than anything, I hope that these campaigns serve as reminders that with every purchase the consumer decides what he supports; and also serve as proof that if a few can achieve something, many can achieve anything.