From us, men. We ourselves are the threat pushing these species to extinction . If no measures are taken, some of these species could eventually disappear.

Extinction exists. There can be natural extinctions just as there can be some caused or facilitated by us. And the latter have become more frequent in the last hundred years. There is a long list of species that have disappeared as a result of our actions. Around the world there are many marine species threatened by over-exploitation and poor fisheries management.

According to the IUCN, more than two hundred species of sharks and rays (and other relatives) are under threat.

Although the MoU is a non-binding instrument (it is not mandatory to abide by it), there is a genuine global concern about the state of these organisms. Proof of this concern, based on scientific evidence, is the very existence of the MoU. When a group of countries can agree to discuss and take action on a problem, it is because they recognize its existence.

So, the meeting last week was a success thanks to the addition of new species to the instrument. He went from seven species in Annex I to Twenty Nine. Bad news (there are more endangered species) accompanied by a good sign: countries recognize the threat and agree to do something about it.

This achievement seems small, but it is not. It requires a lot of international science and belief. Most significant for me is that this inclusion was agreed by consensus. The 38 signatories of the MoU (plus the European Union) agreed that these 29 species should receive more attention in its management.

If Costa Rica had not supported these measures, as some people demanded, it would have been the only country to take that position. The polarized debate that has taken place in Costa Rica is no stranger to other latitudes. The management of fisheries and resources is a global debate. Some sectors have argued that non-governmental organizations have devised a problem that does not exist to further their interests. However that these 39 countries, not organizations but nations have agreed on a joint vision of a problem is proof that this approach is not a local occurrence but a global reality. Overfishing is not an invention. And it is possibly a more serious threat than we understand.

39 countries have agreed that this problem is a global reality

Marine resources are not a subsidy to poverty

Once we’ve accepted the problem, we must accept their causes. These and many other species are being threatened by human appetite for marine resources and historical neglect in managing these resources.

Costa Rica has not done enough in fisheries management. As a colleague pointed out to me in recent days, INCOPESCA’s management insists on supporting sectoral interests and neglecting its obligations to administer public funds. The abundance of many of these resources has declined so much that the conflict over its use has increased greatly. The President of Costa Rica attended the meeting, which to me is a sign of its relevance. He said that there must be no dichotomy between conservation and production. And the President speaks the truth. However, so far that speech has not been translated into concrete actions. We continue to use marine resources as a subsidy to coastal poverty. But that is not the solution to poverty. The excessive and uncontrolled use of resources is causing the problem.

According to Peter Seligman, President of Conservation International, you can not separate environmental conservation and human development. He says it’s like having to choose between your lungs or your heart. Whatever the choice, we would die.

To choose to conservation and production is not an option either in Costa Rica or anywhere in the world. The president should not choose between those but to embrace both ways. Sustainability can only be achieved through actions, never inactions that give continuity to the current overexploitation.

To keep doing the same but with different justifications, will not produce different results. Coastal ecosystems and other resources are damaged wether they are exploited by large or small industries, Ticos or foreigners.

For now, Costa Rica has honored its tradition and responsibility by supporting the inclusion of these species in the Memorandum of the Convention on Migratory Species. A right step by MINAE and the Government to take a position aligned with their values and those of the 38 signatories of the MoU. Now we have to act, leave aside any fears and assume our responsibility in the seas. We must move from words to deeds. We must come to a consistent FAO, IATTC, a CITES position. And we must implement verifiable measures to ensure development and sustainability of these resources. 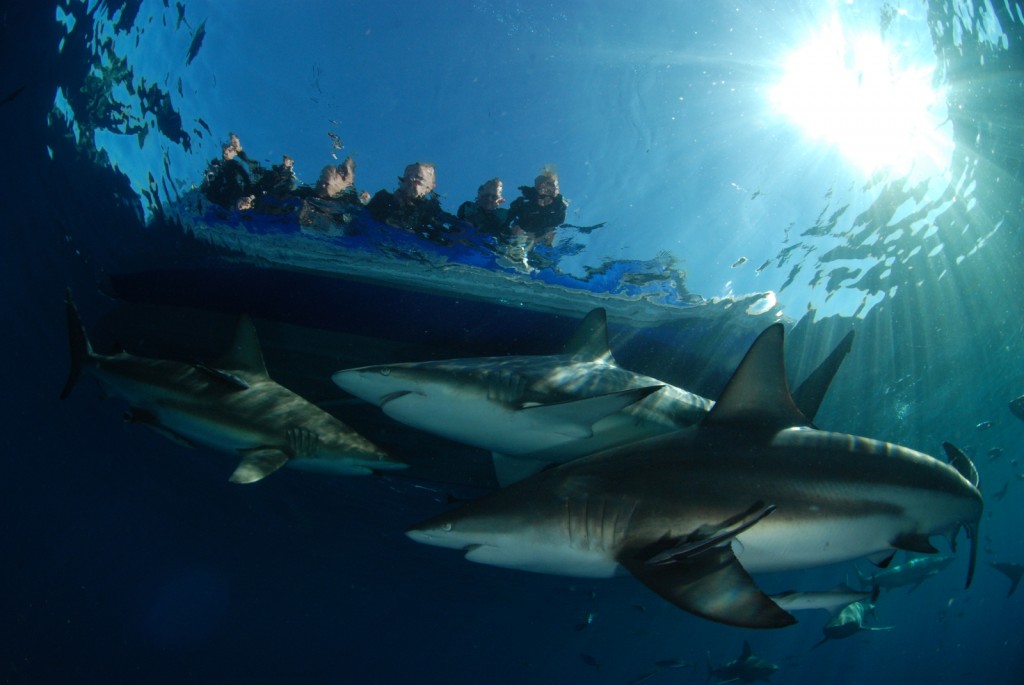 Sharks can be a source of income through eco tourism. Photo by Sijmon de Waal