This is the second part of this article.

Miguel Naranjo is a Costa Rican who, as part of the UNFCCC had to collaborate so that more than 195 countries and the European Union reached an agreement during the last COP21 in Paris.

The main focus of Miguel’s activities during COP21 was that the coordination of activities did not fail, mainly between the main three actors: the office of the Executive Secretary of the UNFCCC, the French presidency of the COP21 and relevant groups of the secretariat UNFCCC.

Miguel tells us about his experience and impressions on this post. 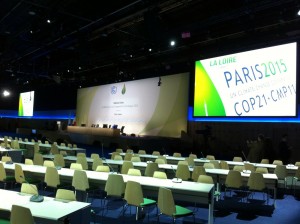 I was it intense working during the COP21? How was you average day?

Overall, very intense and more intense towards the end of the COP. I’d usually arrive in the morning at the time established by the head of the team, given that we had a rotation so some of us could go to rest while others worked. I almost always arrived around 8 in the morning and leave when it was possible: 9, 10 pm or 12 midnight. Some colleagues even had to sleep some days in the conference center or return to the hotel for a few hours to rest and then continue.

We would eat when we could and where we could. Nearly three weeks without a day off and without seeing the sun, because the sun would rise at around 9 am and set by 5 pm.

The distances to be covered in the conference center contributed to physical exhaustion, but mental tiredness was by far the most important. You needed to be alert at all times to the latest new and ensure that communication would flow fluidly and effectively.

In such a negotiation process to ensure that all parties are aware of what is happening is fundamental. If someone feels left out and that he was given wrong information, the entire process may collapse.

How were the moments before the closing and signing of the agreement?

The previous times were filled with emotion. Mainly anticipation and fear that something could go wrong at the last minute. As I said, there was a very positive energy because all of the participants did their part to reach a solution, but the result was not guaranteed at any time. It was a great mix of tension and positive emotion.

In the final moments, with negotiations up until the last second when the plenary was ready to initiate and decide the adoption of the agreement, the tension was high. But that also made the final decision even more celebrated.

The atmosphere of happiness, relief and hope for the future of our planet was wonderful. I think it could be compared with the triumph of your favorite sports team in the world championship, but much deeper, because you know this is transcendental, it can potentially improve the lives of entire generations.

This is important: the agreement was not signed, it was adopted by the COP. Now each country must ratify it within its parliament and present it signed to the UN headquarters in New York. Only when enough countries have delivered it will it enter start to function. The agreed date is 2020, but with actions before that.

Celebration at the moment of the adoption of the agreement

Personally, what lessons do you take from the COP? Did you learn something, see something in a new light?

It is not mandatory that we all think alike or do the same, you just need to collaborate. And COP21 was a demonstration of that. A wake-up call for the pessimists and skeptics, and a light of hope for those who see the glass half full.