Faced with the threat that global warming poses for coastal countries like ours, eyes are beginning to look at an under appreciated hero: mangroves. But if the mangroves will survive to help us, we need to give a hand first, and fast. 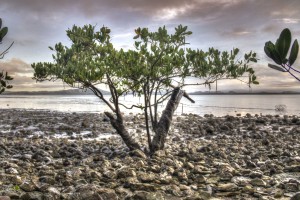 Tomorrow February 2nd we celebrate World Wetlands Day. Mangroves are wetlands and are essential for the health of the oceans. A quick search on google can give you a lot of information about its importance: coastal protection against storms, factory of commercially important fish, clean water …

Despite its fundamental role, mangroves are being lost globally at an alarming rate, more than twice the rate of deforestation of tropical forests.

Where will the mangroves be in a warmer world?

Mangroves are extraordinarily strong plants. They grow in very adverse conditions while producing huge profits for the ecosystem. Could global warming the enemythe mangrove fails to overcome? We do not have enough information to answer that question, but certainly climate change presents  titanic challenges for the mangrove forest: 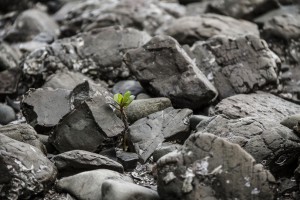 It is anticipated that the global average sea level will rise about 0.88 m between 1990 and 2100 according to IPPC. That will be mainly due to the thermal expansion of seawater (when heated, the water expands and grows) and the melting of the ice sheets. This increase may be the biggest threat that mangroves would face.

Mangroves can adapt to changes in sea level, but these changes have to happen slowly. Global warming is not only fast, but it will gain speed.

Many species of mangrove could face serious problems to grow in waters exceeding the usual level. Their other option would be to start growing inland where the water level was optimal, but this would involve a major effort and would be dependant on the lack of any other obstacles.

Enter tropical storms. Mangroves act as a shield that protects the coast against adverse meteorological events. But they are not invincible, and always pay a price. In warmer sea water storms gain strength and the ability of mangroves to absorb the onslaught could reach its limit.

The ocean is changing in response to temperatures rising on our planet. Its salinity is changing which is a very serious threat to mangroves, because it affects germination and growth of seeds.

One falls, all fall

If we compare the situation of mangroves with other  ecosystems, it should be with coral reefs. Like the mangroves, reefs are essential to the health of the ocean, and their situation is precarious. Global warming could wipe them out.

When a coral grows near a mangrove forest, it protects it against waves. If this barrier disappears, the mangrove has no such protection and must add another challenge to its survival.

In the World Wetlands Day…

The future poses major challenges for mangroves. Their survival depends on their ability to adapt and the measures we implement as a society.

Everything is connected, and if mangroves disappear, there will be significant consequences for Costa Rica. The loss of mangroves would have a serious economic impact on fishing and the quality of life of coastal communities. Mangroves have been proved critical to save lives by shielding us from waves, storms and wind.

An important step is to recognize their enormous value. The mangrove must no longer be the under appreciated hero.